Memorial of Blessed Damien of Molokai 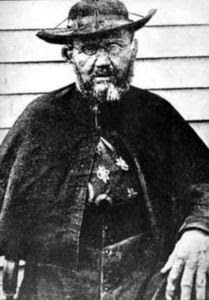 From Vultus Christi, who sees in Damien the patron for all whose lives don't turn out as they planned:

Blessed Damien is, I think, a very suitable patron for those who lives have not turned out as they planned. By the time a child has reached adolescence, he has already dreamed dreams and nourished hopes for his life. The vivid reveries of little boys and girls take shape in a kind of autobiography written in the imagination and lived ahead of time in a world of fantasy. In that world no desire is broken, no hope dashed, no dream unfulfilled, but rarely do the life stories we write for ourselves correspond to those written for us by Providence. Events and circumstances — illness, loss, changes in fortune, failure — shatter dreams, close some doors and open others. The chance encounter with one person or the discovery of a particular book can change the direction of a life, leading to unexpected twists and turns.
The Designs of the Heart of Jesus

Yes to the Plan of God

The life story of each of us written in the Heart of God surpasses by far anything we could have imagined or written for ourselves. When one realizes that one’s life is not unfolding as one thought it would, two responses are possible. One can refuse the path opened by God, “kicking against the goads” (Ac 26:14), or one can say “Yes” to it.

Blessed Damien said “Yes” to God’s astonishing plan for him, a plan that led him from Belgium to Hawaii and, after ten years, to the dreaded leper colony of Molokai. The suffering Christ called Damien to a costly, sacrificial love, and to configuration with himself. He became “as one from whom men hide their faces” (Is 53:3), identified fully with the suffering Christ and with the lepers he served.
A Benedictine Without A Monastery

As a religious of the Congregation of the Sacred Hearts of Jesus and Mary, Father Damien’s life was based on the Rule of Saint Benedict. Without living in a monastery and without the benefits and protection of the cloister, Father Damien found himself living the Rule of Saint Benedict on Molokai in ways prepared for him by the Providence of God. “To relieve the poor. To clothe the naked. To visit the sick. To bury the dead. To give help in trouble. To console the sorrowful. To avoid worldly behaviour. To set nothing before the love of Christ” (RB 4:14-21). “The care of the sick,” says Saint Benedict in another place, “is to be given priority over everything else, so that they are indeed served as Christ would be served, since he himself said, ‘I was sick and you visited me’” (RB 36:1-2).
Posted by Amy Welborn at 8:24 AM No comments: