73 Steps to Spiritual Communion with God 20a

This is a continuation of the 73 Steps to Spiritual Communion with God by Michael Dubruiel. The previous are posted below among the other posts and last week's archives. Here is the twentieth step:

(20) To hold one's self aloof from worldly ways.

If you are like me, you can readily come up with a list of what "worldly ways" means, but too often this list have very little to do with what most spiritual masters mean when they use the term.

St. Benedict, again is writing these counsels for monks. Monks take a vow of obedience to an abbot. The abbot, a term that could be translated "father", watches over the monks and assigns them various tasks for the good of the monastery.

About a year ago, I visited a monastery where the abbot invited me to join the monks for dinner. During the meal taken in silence, while a monk read from one of the Fathers of the Church, several monks had to kneel in front of the abbot's table. They were being punished for some infraction of the rule that they had committed during the day (one monk told me that he had forgotten to put his napkin back in its holder).

As I sat there, in my forties, and witnessed the grown men who were around sixty years old, I momentarily thought of the ways of the world and how foolish this all seemed. But then, I remembered the counsel of Our Lord, "Unless you become like a child, you can not enter the Kingdom of God." 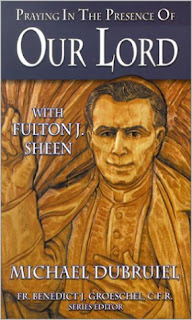