"I was ill and now I am cured" 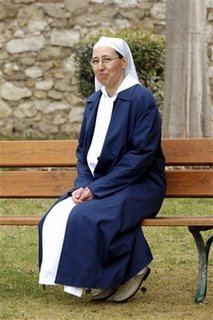 The irony that the miracle would be a cure from Parkinsons, from which the pope suffered himself, horribly.

From Monsters and Critics:

'I was ill and now I am cured,' French Catholic nun Sister Marie Simon-Pierre said Friday as she recounted how praying to the late Pope John Paul II helped cure her of Parkinson's disease in 2005.

'I am cured. It is the work of God through the intercession of John Paul II,' the 46-year-old woman told journalists in the southern French city of Aix-en-Provence. 'It is something very powerful, very difficult to put into words.'

Sister Marie's recovery from the degenerative disorder of the central nervous system, for which no known cure exists, is to be described as a miracle that the late pope performed, two months after his death, and could be used as a basis for his eventual beatification.

On Sunday, an announcement to that effect is scheduled to be made in Sister Marie's diocese of Aix-en-Provence.

Sister Marie, who is a member of an order of nuns working in Catholic maternity hospitals, was diagnosed with Parkinson's in 2002. She said Friday that her disease worsened after Pope John Paul II's death, on April 2, 2005.

She went on to say how she and her entire order then prayed for her continuously, using the late pope as an intermediary, and how she was suddenly cured on the night of June 2, two months after John Paul II died.

'It is up to the Church to make a declaration and to acknowledge that it is a miracle,' Sister Marie said.
Posted by Amy Welborn at 7:16 AM