We picked up General Audience tickets at the Bronze Door on Tuesday afternoon, only to discover that they weren't anything special in spite of being obtained from a very good source.
Tuesday evening we proceeded to catch the tram that would take us to the banks of the Tiber, near where the students of St. Thomas University studying in Rome reside. There were several others waiting for the tram and we waited there quite awhile when a man came over and said in Italian that we should get on the bus that had the same number (he motioned while speaking in Italian...I understood the motioning not the Italian). We got on the bus which slowly pulled out, drove slowly around the block and then the driver returned us to the same spot we had been standing for the past twenty minutes. Then the tram arrived (not sure what was going on) but we were happy to be headed in the right direction. Arriving at the spot with some clarification we found the St. Thomas students waiting for us at the gate.
What a great group of young people! Very zealous for the faith, living, studying and praying in Rome. The Roman Roamin was are gracious host and reading her blog you can get a great feel for what students in the program are experiencing.
We gathered for dinner and had our first crisis of the night when Joseph's little airplane's wheel fell off and like "Rachel bewailing her children" he could not be consoled and knocked over a glass of water. This made it a little difficult for me to catch up with Father Joseph Carolla who serves as a chaplain for the group, and used to teach with me at Jesuit High School in Tampa some years ago. Father now has his Doctorate in Patristics and teaches at the Gregorian. We compared war stories and caught up while Joseph continued to whine about the plane. Finally I found the missing wheel, and Father found a student who had crazy glue and the wheel was repaired, although the propellar and broken off in the process (this also was repared--funny I haven't seen that plane since we returned back to the states).
After a nice meal we gathered upstaires and Amy talked about the Da Vinci Code, I added a few lines about who Jesus was betrothed to and how that related to the Eucharist and Father Joe corrected me as was needed. Here is a picture from Mary's blog from the event: 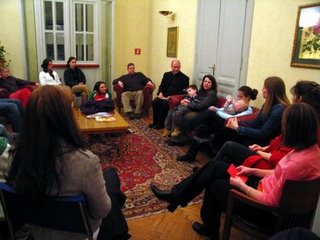 Walking back to the tram, Father and I were able to catch up a bit more before he went in one direction and we in another.