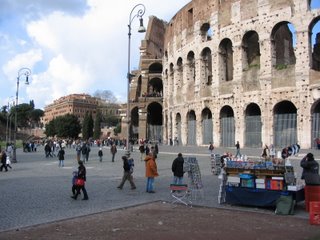 The scavi tours completed, it was time to head to the Roman Forum. We took the bus to the Termini and then caught the Metro train to the Coloseum. The station lets you out right at the Coloseum and its quite a sight. I'll admit to being a little tired at this point (even as I write this several weeks afterwards). There were a number of people offering tours in English, we hooked up with one who then purchased the tickets for us, charging 6 euro extra for the tour, but by doing this there was no wait in a line and after a short wait we were inside.
The Coloseum is one of those sites that before the papacy of Pope John Paul (this is my recollection anyway and it is certianly effected by what we see of papal ceremonies on television) I wouldn't have thought of as a religious site. Even the tour guide who was Italian and spoke English with great force as though every phrase she spoke was a command rather than information pointed out almost immediately that the wooden cross that is central to the Coloseum "that!" she said loudly "is not original!" "It was put there by Pope John Paul the Second!" I believe that Pope John Paul reclaimed this site of martyrdoms for Christianity in the same way that pontiffs before him had done.
The tour guide was very entertaining, she sang the glories of Roman workmanship, their ability to create a structure that would be difficult to recreate today. With her flag she pointed out "original!" and "not original!" Other parts of her presentation were dramatic recreations of the events that would have transpired on this spot, sometimes aided by her illustrated guidebook. 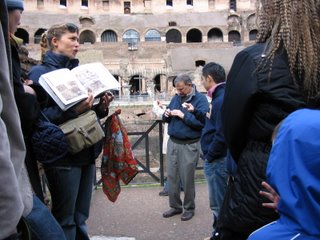 In the picture you'll notice the book, and the flag and if you look dead center (click on the picture to enlarge it might aid you in this exercise) you'll see the cross dead center erected by Pope John Paul II ("not original!"). This is the day that discovering that I had 1500 pictures remaining on my camera decided to start taking lots of pictures, which is a help in remembering what we did on this day as well as indicting me for taking so few earlier in the week.
Back to the tour, it was brief--around 30 minutes and then we were told to meet at a certian spot in about an hour for the continuation of the tour of the Palantine hill. So we walked around, and up to the upper levels of the Coloseum. It is easy to be caught up in the magnificent structure and to forget that on this spot lives were sacrificed for entertainment. One of the dramatic enactments of the tour was when the tour guide said with great gusto first in Latin and then in her command English "Hail, Caesar! We, who are about to die, salute you" and then extended her hand toward the Emperor that evoked the Nazi salute to Hitler. The martyrs who died here saluted another, the real God and changed the city of Rome and the Empire that was the Roman. Other Caesar's continue to arise demanding the lives of their followers in exchange for whatever temporal kingdom. Looking down at the ruins of the Coloseum, patched up and being held together by reinforcements of one type or another--the Cross erected by Pope John Paul II speaks to the victory over innocent suffering of countless victims of the false god's of wealth, pleasure and youth. 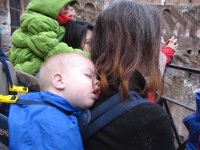 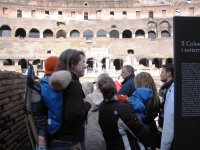 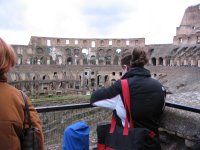 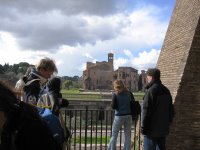 The tour guide had actually begun her tour outside of the Coloseum pointing out the Arch of Constantine, perhaps another symbol of the victory over Christianity since it marks the victory of Constantine that was later attributed to his vision of the Cross of Christ as the way to victory. There is nothing particularly Christian about the arch and the tour guide pointed out that "this is original" and that in Paris and Berlin you'll find copies that are larger (and perhaps now more famous). 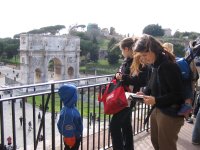 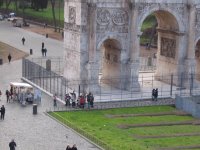 Coming out of the Coloseum, we decided against the tour of the Palantine Hill, opting instead to go through the Forum. As we made our way in that direction while trying to steer Joseph away from a newstand I was attacked by one of the Roman's in the garb of a gladiator with his sword--this was unexpected and I probably jumped a foot or two. Joseph said, "I'll fight him" but when another approached from another direction he moved around so that if this one "sworded me" he wouldn't get hurt--so much for courage.
We made our way up the via sacra and began fumbling in our tour books trying to find where we were and what everything we were seeing was (some of this must have been fatigue because I have some of those tour books open before me now and everything is so clear and understandable that I can't figure out how we could have been confused then but we were and not alone in that regard). While we sat by the Basilica of 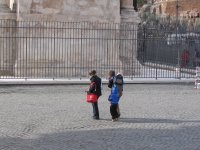 Constantine and Maxentius (not knowing it was that at the time)another family approached us and asked us if we knew what this was, we didn't. Some were from Cincinnati and one man a doctor said that he would be giving a talk in Fort Wayne the day after we returned...small world.
Another problem at this point was we were right outside of the Church of St. Frances of Rome and there didn't seem to be anyway to get into it. Her feast was last Thursday (March 9) and when I read the Office of Readings for her feast I was disappointed that we never made it into this church were she rests.
Moving on from the amazing ruins of the Basilica of Constantine we made our way into the heart of the Forum. For the most part you can just look at the ruins (if these had been made into Churches you might actually be able to enter them as you can the Roman Senate). The Temple of Julius Ceasar marking the spot where he was cremated was interesting (I had viewed HBO's Rome last winter) and there was a fresh rose on the stone marking the spot.Here are a few pictures of this spot, in the second and third you can see the Temple of Antoninus and Faustina in the background.In the fourth we continue along our way, notice the baby must be back on my back since he isn't with the other three. 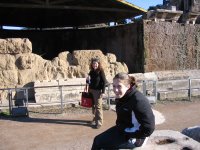 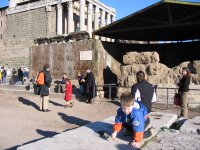 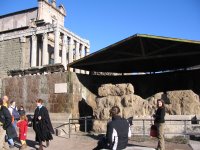 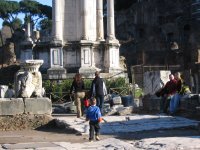 There are a lot of pilars in the Forum area and they cast a long shadow, especially when the sun is laying low in the sky. Here Joseph finds a contest of shadows with three pilars (from the Temple of Vespasian) and Katie finds that fallen pilars make a good seat. Joseph uses another pilar to form his own "Arch of Triumph." 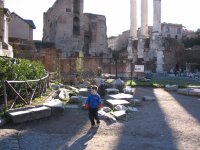 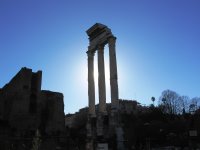 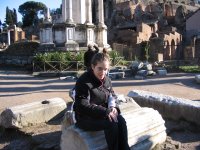 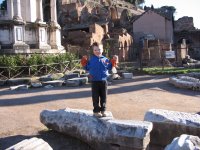 The Temple of Saturn was illuminated by the sun, Joseph felt the need to offer ablutions, Amy outside of Santi Luca e Martina (site of the Roman Senate) and the crew emerging from the same Church bathed in sunlight. 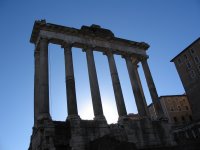 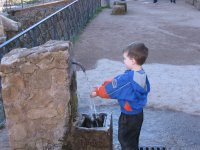 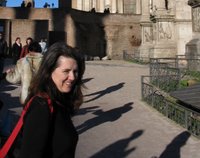 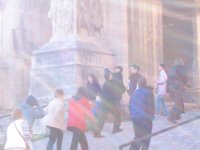 Next it was to the Church of San Giuseppe dei Falegnami (St. Joseph the Carpenter), our Joseph's patron and site of the Mamertine Prison. Joseph was a little too interested in the prison and the sewer but we did manage to spend some time in prayer here. 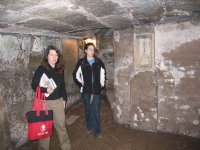 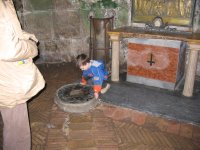 of the French"...there was a porter at the door that was locked who informed us that it was closed on Thursdays (but open on Friday's...so we'll be back). We then went to the Church of Sant'Agostino, "St. Augustine", there was some restoration going on and St. Monica's tomb was blocked, but I noticed someone coming from there, so Michael (on my back) and I made our way to St.Monica's tomb to offer some prayers. Another spot of interest in this Church was the Caravaggio work "The Madonna Receiving Pilgrims" which Amy had told me before hand had been critized when it first appeared because the Virgin's feet were dirty, for the record I didn't think they did personally.
I found this church to be very peaceful, of course it was early evening and we hadn't been in our usual dose of Churches on this day, so this visit stood out a bit more in contrast to the afternoon of Roman ruins. It is amazing to think of the millions of lives that have been touched by Augustine's confessions and to be in the Church that contained his saintly mother's tomb gave some sense of being more connected.
Then emerging from the Church we set out on foot through the narrow streets that would take us back to St. Peter's in preparation for the evening gig that Amy had doing Theology on Tap in Rome. We found a vendor selling wool caps and bought one for Michael the baby (this day had been a typical Spring Roman day, warm one minute, very chilly the next), he happily wore his hat. We stopped in front of the statue of Saint Catherine where Katie posed next to her patron saint for a picture. 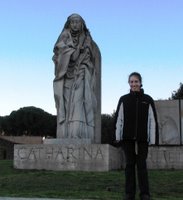 And then just before we made our turn toward our apartment, Joseph posed for one of my favorite pictures of St. Peter's as the sun set painting a beautiful backdrop in the sky. 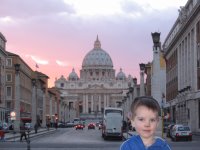