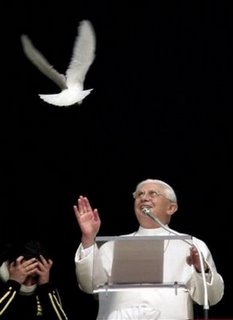 Persons consecrated in poverty, chastity and obedience 'are eloquent signs in the world ' of God's merciful love, celebrated in the encyclical 'Deus caritas est.' Recalling the recently released document, Benedict XVI reaffirmed at today's Angelus 'the primacy of charity in the life of Christians and in the Church', and saints as 'privileged witnesses' who 'have made of their existence, in thousands of different tonalities, a hymn to God-Love.' The Pope cited the past week's saints from the liturgical calendar (Paul, Timothy, Titus, Angela Merici, Thomas Aquinas) and the saints mentioned in his Encyclical, who are 'known mainly for their charity': John of God, Camillo de Lellis, Vincent de Paul, Louise de Marillac, Giuseppe Cottolengo, Luigi Orione, Teresa of Calcutta. In referring to them, all consecrated persons, the Pope reaffirmed 'the importance of consecrated life as an expression and school of charity' and the 'imitation of Christ in chastity, poverty and obedience....entirely geared to the attainment of perfect charity.' To indicate to the entire Church the importance of the state of the evangelical counsels, Benedict XVI will preside Mass at Saint Peter's Basilica on February 2, Feast of the Presentation of Jesus in the Temple and World Day for Consecrated Life."

You may recall that last year when the dove was released on the same day that it flew back in toward Pope John Paul II causing him to be very animated.
Posted by Amy Welborn at 7:23 AM